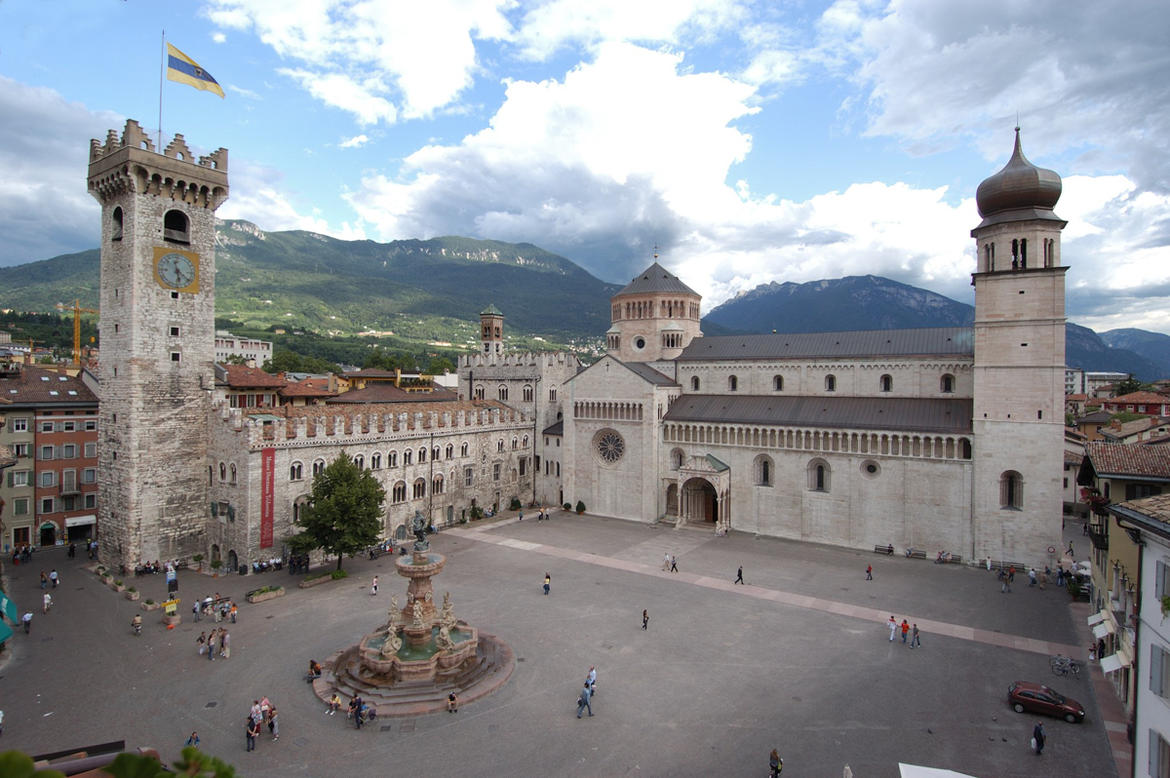 The Eastern section of Piazza del Duomo is overlooked by the bishop's former residence - later called Palazzo Pretorio - and by the Torre di Piazza, also known as Torre Civica, since symbol of municipal power.

Torre Civica was built in year 1150 on the remains of Porta Veronensis, the ancient gate to Trento (Tridentum), along the Claudia Augusta way, in the Roman age. The prince bishop commissioned a fortress made of white ammonitic limestone in order to defend the square; since it was around 22 meters of height and more than 2 meters of thickness, its aspect was certainly quite massive.

A document dating back to 1224 mentions two bells in the tower, while another one in 1321 says that a certain Giovanni worked there as a guardian. As a matter of fact Torre Civica assumed gradually the role of a prison as for Torre Vanga and Torre della Tromba. It hosted six prisoners at a time waiting for the judicial process to take place in the adjacent Palazzo Pretorio tribunal. Special prison cells were reserved for women (femenèle) and some others for debtors (fermaiola). Prisoners used rusty spikes to write something on the walls; we can still appreciate some of these inscriptions, as well as the holes to bring food to the prisoners througn the doors.

We know from documents that in 1449 a certain Bartolameo from Rimini was called to Trento in order to manufacture the two Torre Civica bells. One of them was called “Renga” and it used to call citizens to the pubblic meetings (“arengo”), while the other one, named “Guardia”, was meant to toll the hours and sound alarm in case of fire. Instead, the Cathedral belltowers, which were very close, played a religious role.

On the occasion of the Council of Trento (1545-1563) the painter Gerolamo Fontana from Verona painted on the square side nice frescoes representing Saint Vigilio-the patron saint of Trento-and his mother Massenza; in 1723 they would be restored by the famous artist Antonio Gresta from Ala but now are lost. Moreover, at the Council time the tower was equipped with a new clock and fireworks were occasionally set off on its top.

In August 2015 a fire broke out in the tower and ruined the 18th century “Renga”; due to the very high temperature it turned mute and its clapper went tumbling down the stairs leaving some evident signs. Instead, the XV secolo “Guardia” was temporarily hosted in a restoration laboratory and so it was fortunately preserved. The ancient “Renga” is still in the tower but it has been replaced in the cell by a new bell, which plays the same note.

The Municipality of Trento carried out restoration works such as a consolidation of walls and the construction of a steel staircase leading to the bell cell and an amazing view on Piazza Duomo. Some signs of fire have been intentionally left on the beams.

Torre Civica is 43 meters high and is adjacent to the Diocesan Museum, which hosts important masterpieces related to the Council of Trento and not only.

The tower is currently under renovation, and therefore is NOT open to visitors.

The Tower is not accessible to disabled persons. Possibility of virtual tours by means of a video station located in the Diocesan Museum.

The parking indicated is located in Garibaldi Street; another 4 stalls reserved for people with disabilities are in Belenzani Street about 50 meters away. The access door indicated is that of the Diocesan Museum and has a 5 cm high threshold, a 90 cm high counter. The Tower can be visited by reservation only stairs connected by 12 different runs. Access to the Tower and the video station that allows a virtual visit to the Tower are located on the second floor of the Museum accessible by the stairlift (capacity 250 kg) and the indicated lift. Inside the structure, other short ramps with a maximum gradient of 15%. The equipped toilets are located on the ground floor of the Museum and are preceded by an 88cm long run with a 15% gradient; the toilet is equipped with grab bars on both sides.