The attack on the Twin Towers in an Afghan war rug 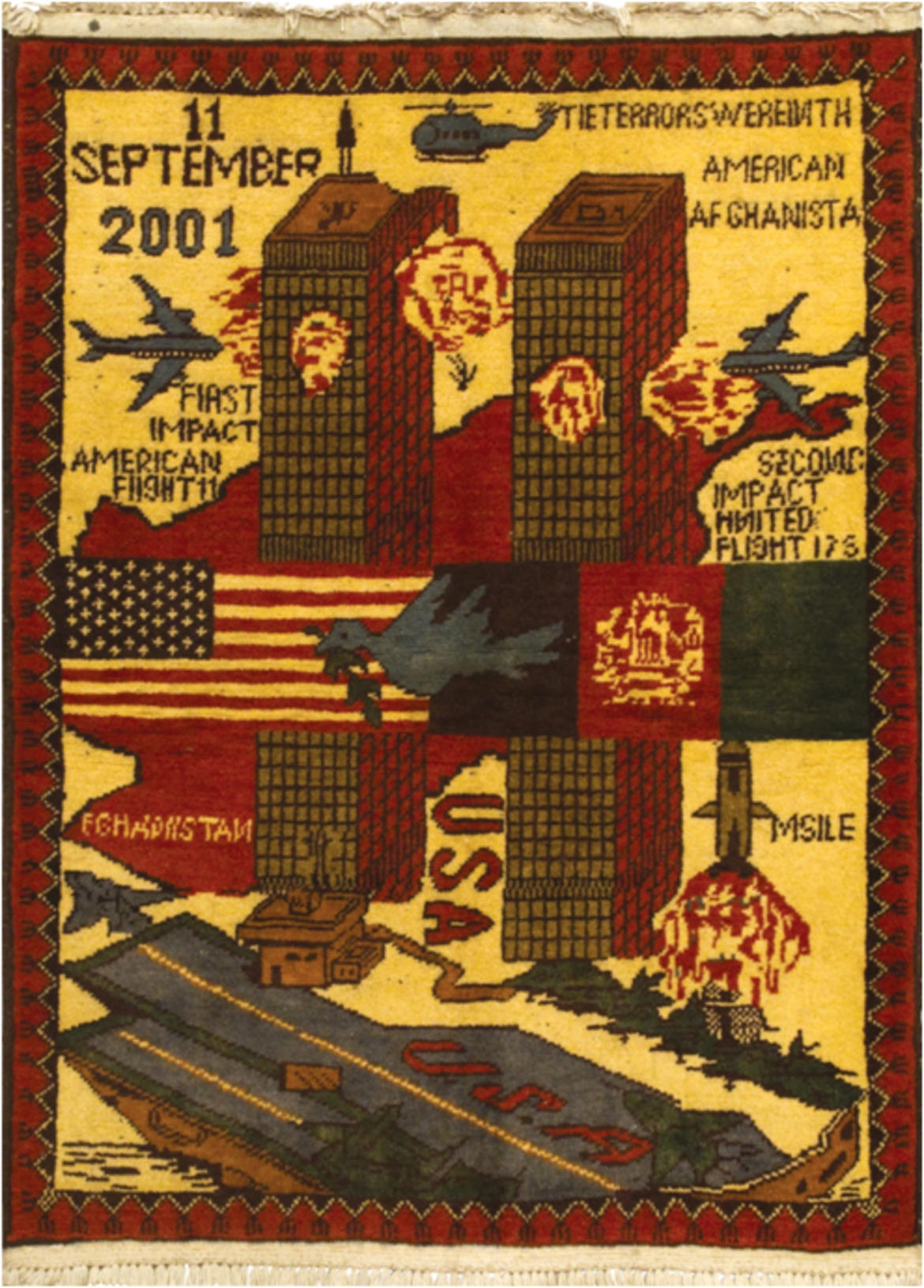 In collaboration with CooperAction onlus, the Mart presents "Calpestare la guerra/Step on war" exhibition at the Casa d’Arte Futurista Depero. Forming part of the Mart/Great War 1914-2014 cultural programme planned for the centenary of the First World War. The exhibition is curated by Nicoletta Boschiero and Edoardo Marino and presents part of one of the most important European collections of war rugs.

The museum dedicated to the creativity of Fortunato Depero, which the artist had himself desired and regarded as a venue for meeting and dialogue, will now host 50 war rugs from Afghanistan, produced since 1979 in the wake of the Soviet invasion.

Since then, the Afghan population, having lost all memory of the openness and reforms of the 1970s, has been living in a situation of perpetual war.

This war, regarded by the world with on/off attention, is told in the warps and knots of the traditional rugs, which become tools of propaganda, of celebration, of resistance and the simple description of tragic everyday scenarios.

Made in traditional manner by skilled knotters for domestic use, these rugs represent the collective memory and art of the various ethnic groups which go to make up the population of Afghanistan in a piecemeal way.

Using woollen yarn in an unusual combination between ancient traditions and new symbols, they have created a wholly original artistic grouping.

Different colours, signs and folklores blend and become the manifestos for proselytism, celebratory iconographies, ostentation of power and, for foreign soldiers, war relics or souvenirs. Some of these rugs can be regarded in every way as works of conceptual art which unwittingly suggest a proximity of manner with the pictures of Alighiero Boetti or the work of Fortunato Depero.

Tragically, the recording of war scenes mixes with the artistic tradition.

From the earliest rugs, in which helicopters and scenes of violence appear alongside ornamental motifs and traditional iconography, there has been a rapid evolution towards the production almost exclusively of war scenes, partly in response to encouragement from the mujahideen, who see the rugs as a form of protest and propaganda.

Kalashnikovs, tanks, guns and hand grenades were now the subject of these war rugs. The Twin Towers and the mujahideen themselves became symbols of resistance and constitute new iconographies in praise of war and their vision of the jihad.

In just a few recent decades, Afghan rug production has sadly been the most significant in this field, marking the most sought-after and historically the most extensive range of war rugs. Above all, thanks to the occupiers, first Soviet and then American, these rugs travelled beyond the borders of this nation constantly at war.

In Europe and the United States, they began to be sold and collected by war veterans, collectors and dealers, who created what is a business in its own right.

Their evident crafted, historical and social qualities make these rugs not merely prized collectors’ pieces but also the object of study and display in galleries, exhibitions and museums, such as the Boca Museum of Art in Philadelphia, which recently dedicated an exhibition to Afghan war rugs.

Among the keenest enthusiasts ever since the early 1990s, there is Edoardo Marino, co-curator of the exhibition at Casa Depero and an expert in decorative arts, as well as collector and author of “Guerre a tappeto. Storia dell’Afghanistan nelle trame dei tappeti di Guerra.”

Marino recognizes the exceptional significance of the production of Afghan war rugs, which has taken on such a scale as to define the chronology of the country’s history.

This creates the basis for Calpestare la guerra/Step on war, one of the most important collections of its kind in the world, found or bought from collectors, dealers, enthusiasts, importers of Oriental rugs, from Canada to Germany, as well as Afghanistan obviously.

But Calpestare la guerra/Step on war is also a campaign for peace and human rights as promoted by the CoooperAction charity through the organization of exhibitions and events, and in the production of documentaries, books and tests raising awareness about the Afghan question and the improvement of the treatment of women.

Many of the collection’s rugs made recently are less well-made and include errors of manufacture, since in most cases they have been made by children.

The CoooperAction association collaborates with and supports an Afghan orphanage in which children are taken in and educated.

Together with the rugs, the exhibition at Casa Depero will include “handkerchiefs of peace” made by women and children and showing everyday scenes in the lives of those accustomed to war. The scenes of violence alternate with childish or poetic whims.