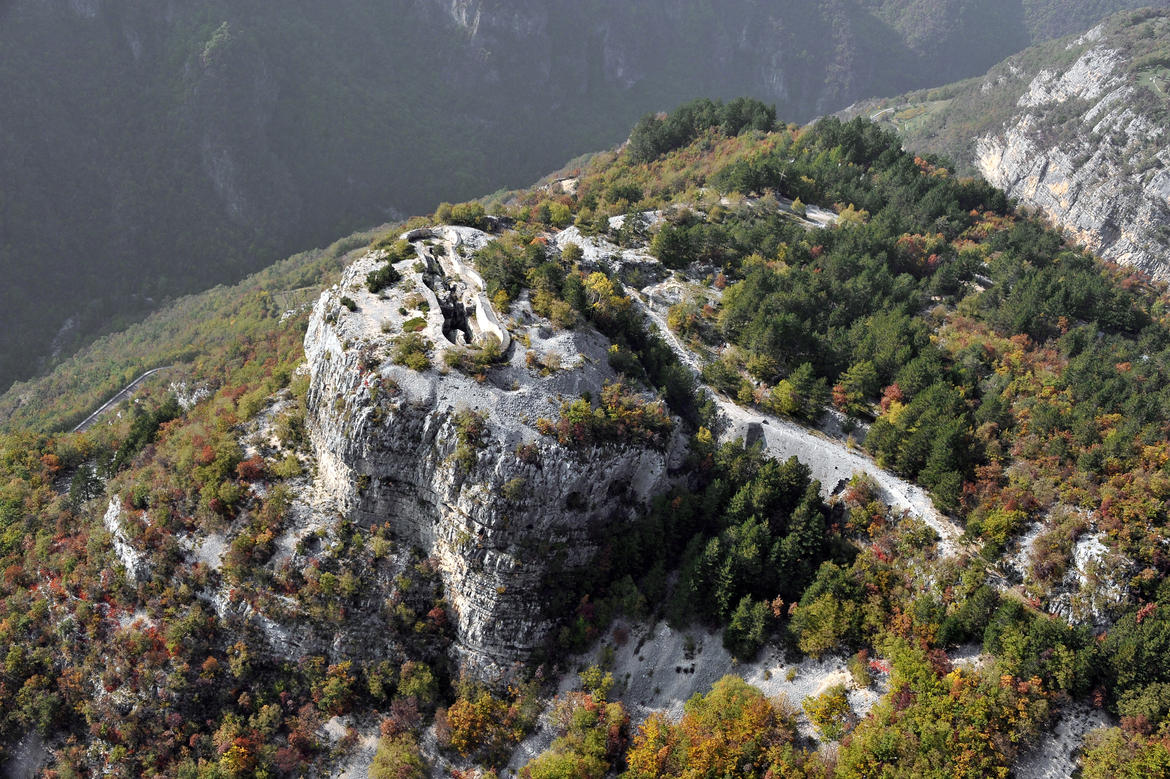 [ Soprintendenza per i beni culturali]

Fort Pozzacchio is above Valmorbia, near the town of Pozzacchio. In Austrian documentation, it was referred to as “Valmorbia Werk”, while in Italian documentation known as “Forte di Pozzacchio”. Situated 882m above sea level on the right hand side of Vallarsa, it became the central stronghold for the Spil-Leno-Zugna-Torta mountain range, with the main aim of blocking any possible Italian invasions towards Rovereto through the Pian della Fugazze and Vallarsa.
The rocky headland had been internally dug up to construct a work of notable military engineering, unassailable either by the troops or artillery, since it had been built in the rock of a hill in the south east part of Pozzacchio. At the start of the conflict it had not yet been completed, as it still lacked two steel domes which were to be armed with 10cm Howitzers and a covering. An aerial view of the fort shows how it adapts perfectly to the geographical form of the site. The moat is naturally formed by the gorge, which is carved into the rock and which cuts straight across, along the entire hill. The flow of the moat was blocked on the southern side by some rocks to connect the area behind the lines. The excavations in the rocks can clearly be seen and were probably used as a storage area. In the north, a counterscarp ditch made of armoured concrete controlled the moat.
For these reasons this fort was considered to be one of the most modern. The underground bunker of the Second World War was developed from this idea. Initially it was abandoned by the Austrians but was used again during the “Strafexpediton” (May 1916) and it was kept until the end of the conflict, despite the Italian onslaught.
Armaments: Two 10cm M14 Howitzers in a rotating steel dome (30cm thick and 2.5 diameter), placed on top of a Vorpranzer (a circular steel base, 2 metres in diameter). Two 7.5 cannons in casemate and numerous machine guns. It could have held about a 100 men.
How to get there: By car, go along the del Pasubio road (SS 46) until the junction of Vanza and follow the road towards Pozzacchio. Shortly before the town, on the last curve there is a small road that veers off to the right. This road takes you to the car park.
Restoration Efforts:
“The unfinished war machine”: This is the theme of the restoration project of the Pozzacchio fort, which will be brought alive not only by the restoration effort but also by the strengthening of the structure, and further still by the idea to build a historical park giving an insight into the town of Rovereto and its museums.