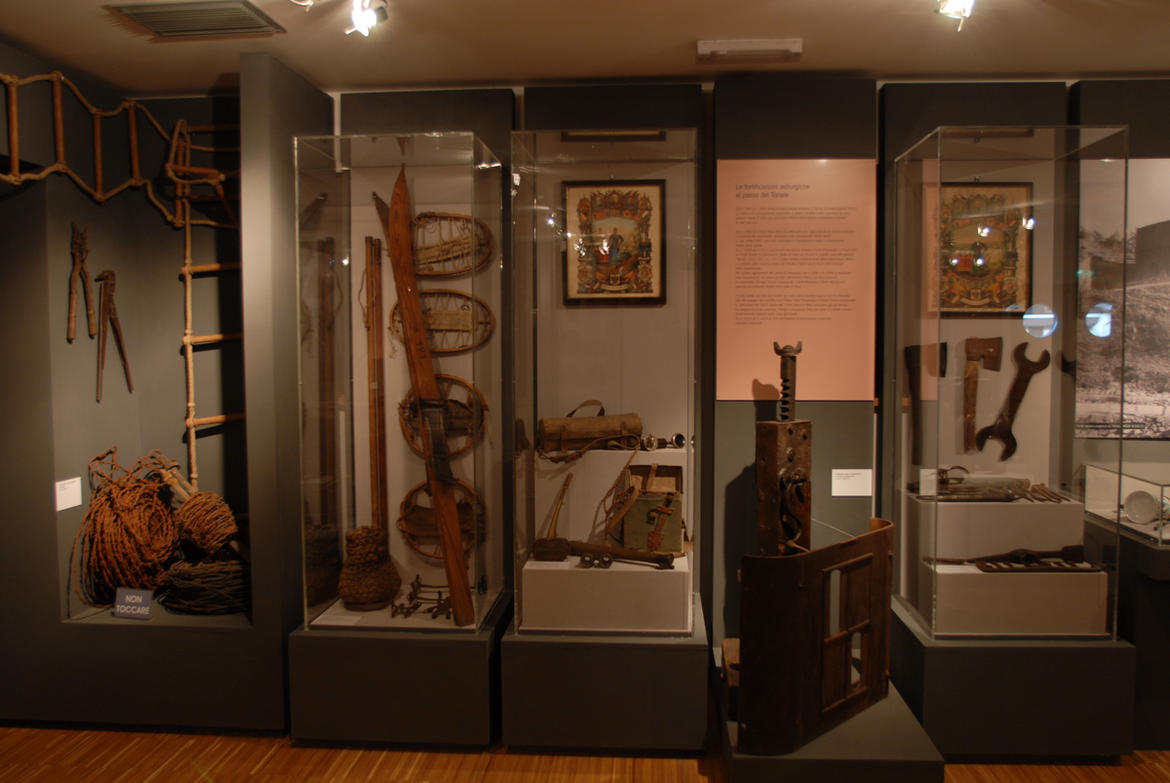 The museum houses the collection of Emilio Serra’s relics, tireless retriever of First World War artefacts. During the summer it organizes guided tours to the forts of the Tonale barrage. In the tunnel of Passo Paradiso, at the arrival area of the cablecar, the “Suoni e voci della Guerra Bianca” exhibition can be visited.
The exhibition, which opened in 2006 at the Vermiglio Cultural Centre, displays artefacts and relics from Emilio Serra which were recovered in the mountains of Valle di Sole. The exhibition is organised into sections illustrating the construction process of the forts in Valle di Sole, the main events of the war on the Tonale front, the story of the refugees in the community of Vermiglio and their return to the devastated area at the end of the war.
On display are weapons, everyday objects, tools, uniforms and personal equipment of the soldiers, memorabilia and decorations. Skis, ice crampons, snow shoes and straw overshoes which belonged to the lookouts bear witness to the harshness of everyday life at high altitudes. Among the most significant findings are prosthetics for amputees. On the platform in the centre of the hall numerous Italian, Austro- Hungarian and German artillery shells of various calibres are arranged.
ACTIVITIES AND SERVICES
The museum has a projection room. Next to the museum is the Municipal Library where you can see texts, documents and photos relating to the events of the First World War concerning the territory of Vermiglio and its surrounding areas. The Cultural Centre has a hall for seminars and conferences.
On request, the museum organises guided tours in Fort Strino and other forts in the area (Fort Zaccarana or Tonale, Fort Mero, Fort Pozzi Alti or Presanella).

The museum is part of Rete Trentino Grande Guerra   , which promotes the collaboration between those who cultivate the passion for the history and recollection of those happenings.