The archaeological site is situated in a panoramic position overlooking the upper Lake Garda area. 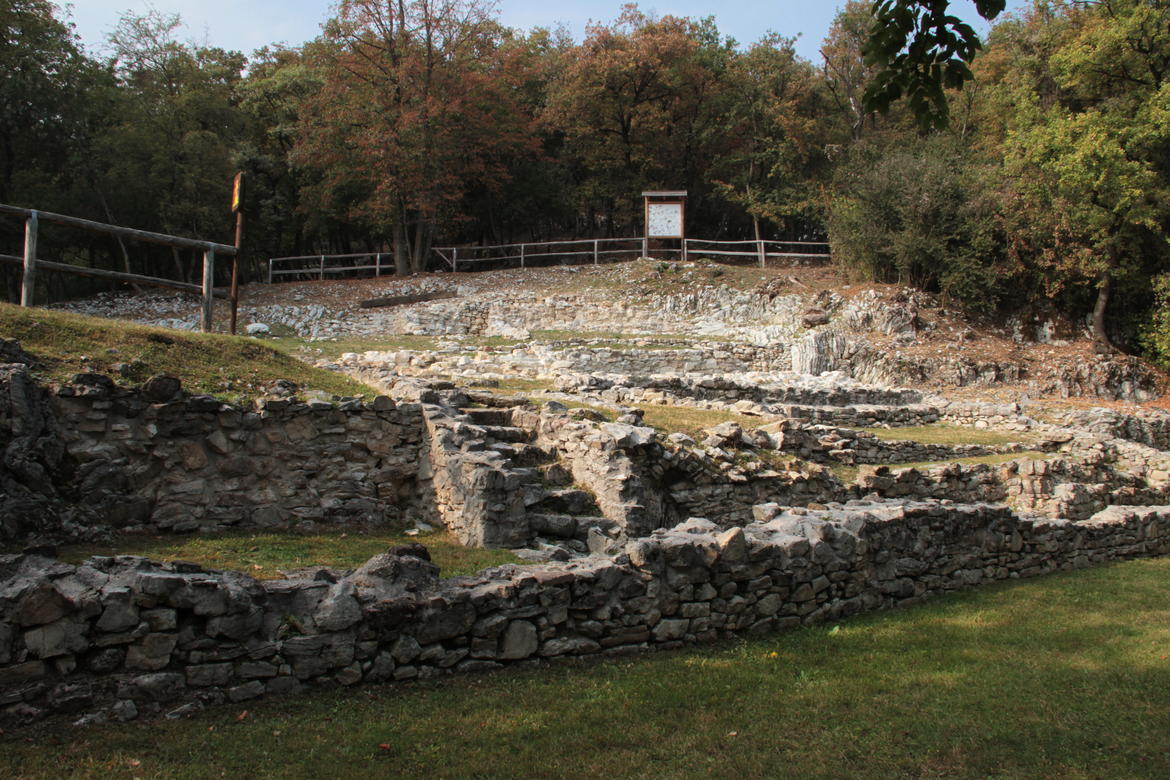 Monte San Martino is situated in a panoramic position overlooking the plain of the upper Lake Garda area.

The archaeological site is found at an altitude of around 800m, strategically placed for communications with the ancient Sommolago area (the plain around Riva), towards the North (with regions across the Alps) and towards the West (with the Brescia area and flatlands).

The route to the North crossed the Ballino pass, the Giudicarie Esteriori area and Molveno to arrive at the Valle di Non, ultimately reaching the alpine passes, whereas to the West, having crossed the Bocchetta di Trat pass, the ancient roads probably ran along the Ledro and Chiese valleys, continuing up to Brescia.

It was precisely the position of the site that led to it being frequented without interruption from the prehistoric and protohistoric era right up to the modern age,  the site being exploited in different ways depending on the period.

In the Second Iron Age (in particular from the 3rd to the 1st century BC) religious rites were carried out there.

During the Roman era (end of the 1st century BC) a large complex was constructed, presumed to have been a sanctuary, remaining in use until the 3rd century AD.

Subsequently, (4th-6th century AD) a settlement developed on the southern side of the hill. This was  perhaps of a military nature (providing logistical support) and included a large building probably designed for public use.

After a certain length of time a small religious building was also constructed in the same southern area. The church, which certainly existed in the Carolingian era (8th-9th century), was subjected to numerous modifications: dedicated to San Martino, it was mentioned in the 13th century and used for religious ceremonies until 1750.

In 1880 the scholar Paolo Orsi reported the discovery, in an area between the village of Pranzo and the hamlet of Campi, of various objects, including a column capital. In Ottone Brentari’s 1902 ‘Guida del Trentino’ we then hear how ”…on monte S. Martino there are ruins, which local tradition says are Roman in date and belong to a temple”. Two decades later, Giacomo Roberti announced that the Civic Museum at Trento had acquired a bronze statuette of Apollo which was reported to have been found “on monte Englo near Riva”. The zone, once used for both pasture and cultivation, had over time become covered by woodland, obscuring all traces of the noted remains. However, in 1969 the presence of a high number of tile and ceramic fragments of Roman date was recognised and in the summer of that same year excavations were started by a group of enthusiasts from Pranzo, directed by Arrigo Guella and Cesare Dongilli. Until 1975 the Soprintendenza alle Antichità delle Venezie (the Antiquities Superintendency of the Venezie) had provided strict directives for this archaeological work, but the site then came under the guardianship of the Provincia autonoma di Trento (autonomous Province of Trento), which, in the next few years, until 1979, helped complete the investigations in the area of the sanctuary. After a long break in the explorations, systematic studies were re-activated in 1996, with regular excavation campaigns which involve students from a variety of universities across Italy and elsewhere in Europe. Currently, research is focussed on the zone downslope from the Roman sanctuary, in an area dominated by the late antique settlement and the church.

The dwellings are relatively similar in their layout and were constructed with mortar-bonded stones and partly exploited pre-Roman terraces. Their roofs featured alternating flat and curved tiles. The rectangular semi-basement room was probably employed for storage; in one of the two buildings there are traces of a vaulted ceiling. In this same building, the small room on the left of the stairs must have been used as a kitchen, since part of a millstone was found here. The large, partially paved quadrangular room can be identified as a workshop, probably to be linked to weaving; numerous loom weights were in fact found in a corner of one of the two buildings. Inside these rooms one can observe a low walling 40 cm high set against the perimeter wall and adjacent to the stone floor: perhaps this formed a type of stand for some work implements. A relatively large and fully paved room in a third building was more probably also used for artisanal activities: it contains a double mixing-mortar in red stone possibly for crushing grain. Some internal partitions and sections of floor may have been made of wood, since numerous carbonised remains have been found. In fact, it seems that the village was totally destroyed by a fire, probably before the 7th century AD. A notable quantity of coins was found in this area, dating chiefly to the 4th century AD.

Towards the middle of the 1st century BC Roman culture progressively added to and supplanted local traditions and forms. It is in this context that we can set the construction of a sanctuary over the Iron Age cult site. This sanctuary then performed religious functions up to but not beyond the 3rd century AD, although other (less well understood) site activities are attested until the 4th century. The complex, constructed in different periods, extends over an area of around 1500 m² across the highest part of the hilltop. Rituals were seemingly celebrated in the open-air, in the large, levelled space at the summit; if continuing older traditions, there were inevitable changes, such as in the offerings of food and drinks made at the altars – parts of these altars have been found in the rubble of the abandoned sanctuary. As well as these altar fragments, there are numerous fragments of single-handled ceramic beakers (of Henkeldellenbecher type) which were used for libations to the gods, and most notable is a stone urn, containing a clay vessel perhaps for offerings. Interestingly, the written texts instead show strong connections still with local tradition: the upper section of one altar in fact carries an epichoric inscription – i.e. in the local language but written in the Latin alphabet. In addition, a fragment of a Roman roof tile, found a few hundred metres downslope of the sanctuary, features an incised text and other characters in the indigenous alphabet. Finally, there is also an altar dedicated by two brothers L(ucius) Tre(—) Primus et Bitumus Sec(undus) to an unknown divinity, whose name is perhaps set within the invocation Mainiali.

The original Christian cult structure was built up against the east wall of the late antique ‘public building’, which thus formed its facade. Of standard W-E orientation, the church comprises a rectangular hall or nave (7.5 x 3.5 m) with an eastern apse and northern entrance. A small but deep underground chamber located under the altar was designed to house the relics (cella memoriae). Sculpted stone fragments recovered from the rubble point to church fittings dating back to the Carolingian era (9th centuries AD); these provide the first certain chronological guide, even if ongoing investigations would suggest much older origins. In the 12th or 13th century the church was renovated and updated: the apse was substantially reinforced, the facade was shifted outwards to the west by about 1.5 m and the flooring was re-worked with slab paving, in so doing raising the floor level by 40 cm. Various burials have been found and excavated around the church: both children and adults were buried either directly in the ground or else in tombs featuring rough stone borders. In the churchyard area only a few traces of walls and a cistern have so far been identified, perhaps belonging to a nearby artisan’s workshop. In terms of historical sources, the church is cited for the first time in 1288 (…via per quam itum ad Sanctum Martinum…) and then specifically called “San Martino sul Monte” only in 1481. We hear otherwise of expenditure for maintenance works in 1547, while the church was interdicted for the first time in 1612. Although other restoration work was undertaken in 1718, just a few decades later, in 1750, it was decided to demolish the building on account of its irreparable state.

Department for Cultural Heritage of Trento,

To learn more about it

The archaeological site can be reached by car (10 km from Riva del Garda, along the road to Campi di Riva del Garda – Malga Grassi), and then on foot (15 minutes) along a shady trail in the woods.

The site can be reached only on foot along a mountain trail, a long uneven path.