The Buonconsiglio Castle is the largest and most important monumental complex of the Trentino Alto Adige region. It was the residence of the prince-bishops of Trento from the 13th century to the end of the 18th century. Castelvecchio is the oldest nucleus; the Magno Palazzo is the 16th century expansion and is one of the most sumptuous Renaissance-style palaces in Italy. 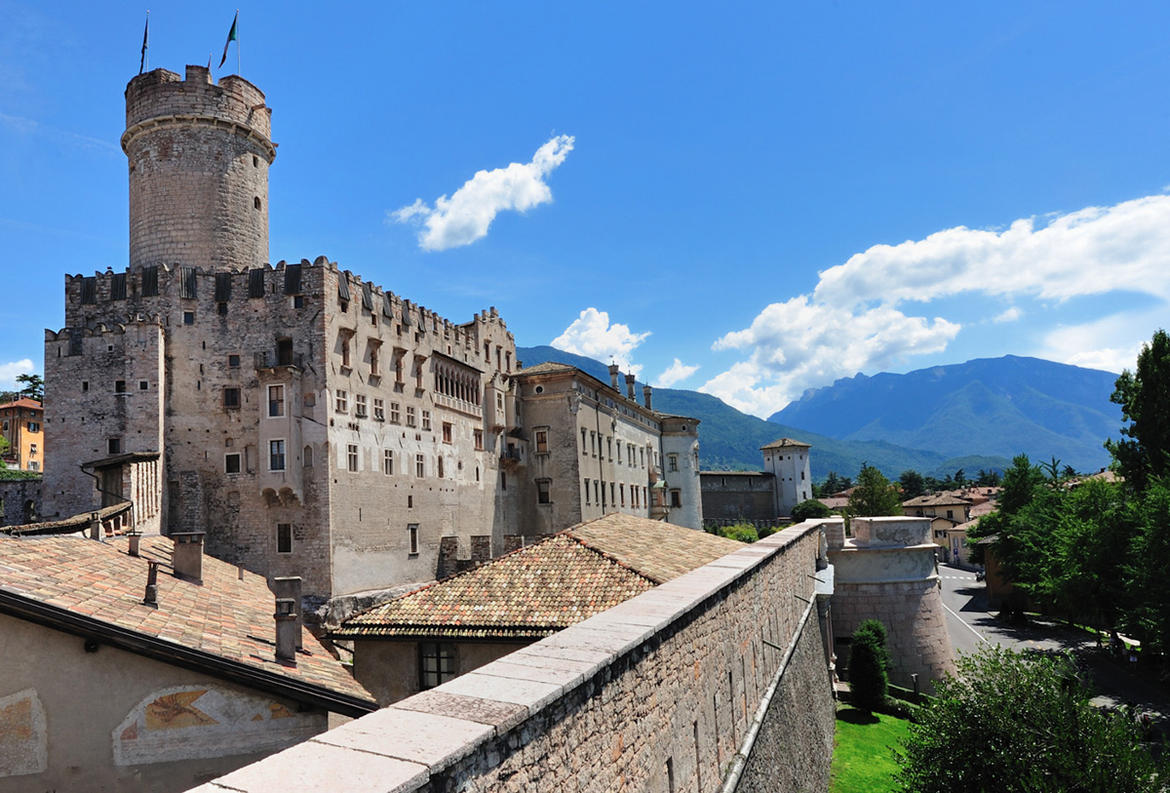 The Buonconsiglio Castle is the largest and most important monumental complex of the Trentino Alto Adige region. It was the residence of the prince-bishops of Trento from the 13th century to the end of the 18th century, and is composed of a series of buildings of different eras, enclosed by walls and positioned slightly higher than the city. Castelvecchio is the oldest nucleus, dominated by an imposing cylindrical tower; the Magno Palazzo is the 16th century expansion in the Italian Renaissance-style as commissioned by the Prince-Bishop and Cardinal Bernardo Cles (1485-1539); the Baroque-style Giunta Albertiana dates from the end of the 17th century. At the extreme south of the complex is the Torre Aquila, within which is conserved the famous Cycle of the Months, one of the most fascinating secular pictorial cycles of the late Middle Ages. Also of exceptional interest are the extensive cycle of frescoes commissioned by the bishops to decorate the interior walls of the Castle, mainly in the late Middle Ages to the Renaissance period. After the end of the Episcopal principality (1803) the castle was used as a barracks; following its restoration in 1924, it became the National Museum, and since 1973 it belongs to the Autonomous Province of Trento. Currently it is the principal attraction among the museum group comprised of four castles which are among the most suggestive and prestigious of the Trentino area: in reference to Trento are Stenico Castle, in the Giudicarie Valley, Beseno Castle, in the Adige Valley between Trento and Rovereto, and Thun Castle, in the Valle di Non.

There are architectural barriers in all museum structures. It is recommended to contact the museum (tel. ++39 0461 233770, tel. ++39 0461 492811) in order to check how to access and visit the venue. Free entry tickets are offered to visitors with disabilities and their companions. The visitor can already find below useful information supplied by HandiCREA about the structural features and the options of mobility inside the venue.

The indicated parking spaces are located in the nearby Piazza della Mostra. The cobblestone access, with fewer barriers, is from Porta San Martino, where the visitor can use the indicated ramp. When previously requested, it is possible to park in the internal cobblestone paved courtyard, where there is a pedestrian path paved with regular stone slabs, that is approximately 30 m long (slope: 8-10%) and leads to the Garden and the cafeteria. From the cafeteria, visitors can take the indicated lift, which offers access to the loft and the frescoed Refettorio Clesiano; it also allows to reach the old Bernardo Clesio’s Cellar, but the  access is via one 24 cm high step (inside, uneven flooring and large and deep drainage channels). The other areas of the castle can be visited only by taking the stairs. Sala delle Marangonerie, in particular, can be accessed through a set of cobblestone stairs (10 steps with a height ranging between 7 and 10 cm, and a depth between 82 and 86 cm). The wheelchair accessibile toilets are located on the ground fllor: grab bars are installed on both sides of the wc, and the clear space for manoeuvre is of 94 cm, because of the presence of a cleaning table (dimensions: 120 x 60 cm).