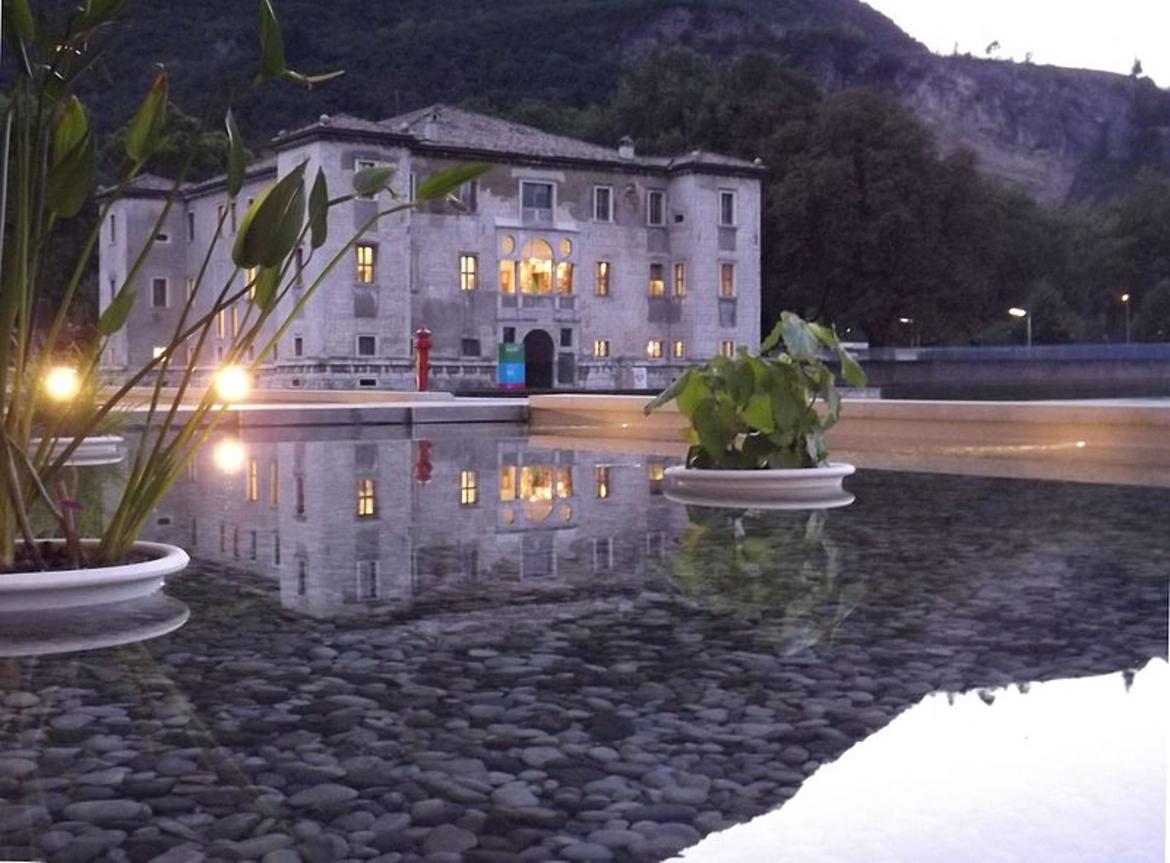 The name of the palace comes from the double row of poplars which were once aligned alongside the route of the Convent "S. Croce" that took to the villa through the monumental entrance called "Tre Portoni". The landscape was totally transformed by the construction of the railway and the industrial and sport facilities, which had damaged the aspect of the palace.
Nowadays, it is very difficult to retrace the history of the palace because of the total lack of documents reporting its founding date. However, it is renown that Gaudenzio Madruzzo ordered it to be built; he was father of Cristoforo, who was prince bishop during the Council of Trento (1539-1567). Francesco Chiaramella from Gandino (Bergamo) was the architect of the palace and also the military engineer of the cardinal. Nevertheless, the palace was probably built during the first half of the XVI century; maybe in 1549 it hosted Felipe II de España, son of the emperor Carlos I.

The square building has four angular towers and is divided, on the ground floor, into a front door (above it there is a similar windowed door) overlooking the East side of Trento. On the Eastern façade it is possible to see more coats of frescoed face with architectural motifs. The paintings of the rooms were made by the workmen who worked also in the Clesian Magno Palazzo of the Buonconsiglio Castle, following the Dossis, Romanino and Marcello Fogolino.
Once, on the ground floor, there were the housekeeping rooms and the kitchen (built on two levels, with a big fireplace and a spring), from where it was possible to reach the other side of the palace through an underpass. The staterooms, which were once decorated with frescoed cycles, are on the towers of the first and second floors.
On the first floor there is the "gran sala in quadro e affrescata con le imprese di Carlo V e della di lui vita" ("the big frescoed room with the feats and life of Carlos I"), which was painted after the death of the emperor in 1558. Of this cycle only a few fragments are preserved. The room with a fireplace is decorated with the cycle of Months; above the fireplace there is the big emblem of the Madruzzos. In the South-Eastern tower it is possible to admire the cycle dedicated to the man's life, which is attributed to Marcello Fogolino, also author of the upper towers' frescoes.
On the second floor, in the South-Eastern tower, there is the cycle of the seven liberal arts (it is well preserved and restored): grammar, logic, rhetoric, arithmetic, music, geometry and astronomy. The North-Eastern tower hosts the cycle of the cardinal and theological virtues: carefulness, justice, strength, temperance, faith, hope and charity. In the XVIII century the marvellous palace started its decline. In 1796 a great fire ruined the palace irreparably. It was first restored between 1833-34 and then in 1867; it was later left and used as farmhouse. In 1969 it was acquired by the Province, which arranged for its restoration.

According to a project in progress, the palazzo is nowadays being arranged with spaces for meetings and workshops on the ground floor, a showcase of the treasures of Trentino (shown through multimediality) on the second floor and, on the last floor, an exposition of Trentino's collections.