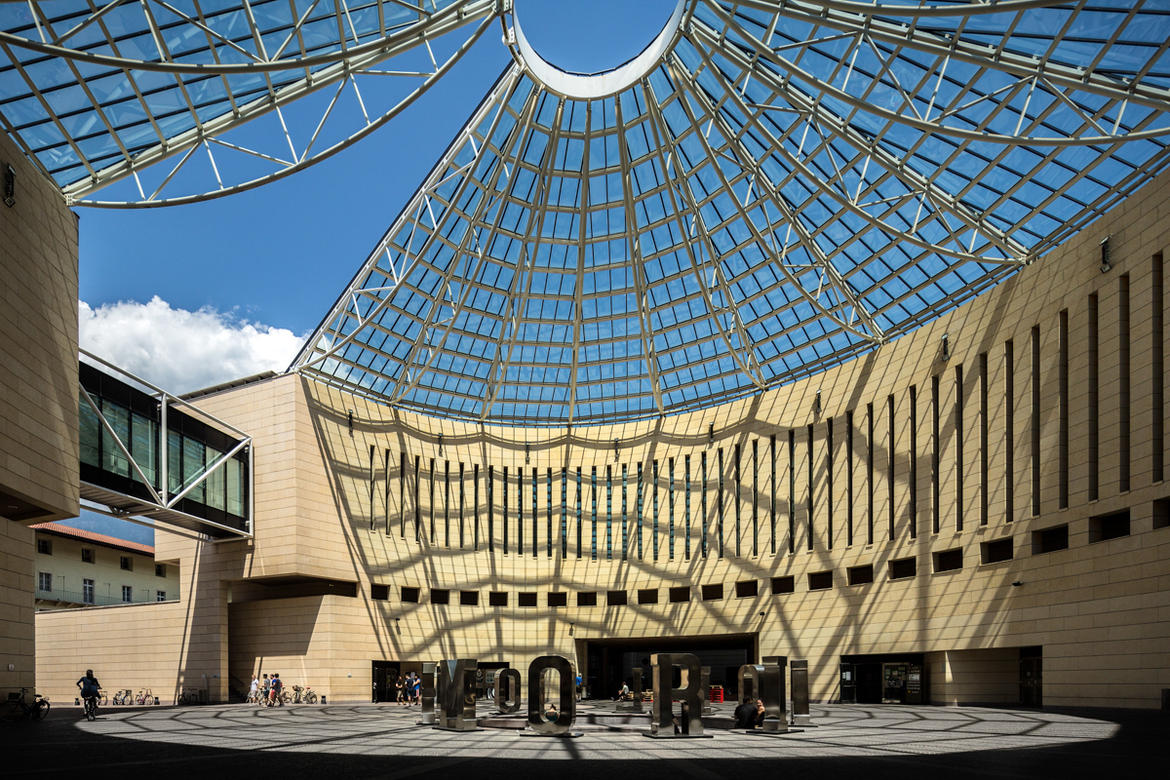 Founded in 1987 under the aegis of the Autonomous Province of Trento, the Mart, Museum of Modern and Contemporary Art of Trento and Rovereto operates through three separate sites: the museum’s main campus in Rovereto, an extensive architectural complex designed by Mario Botta and Giulio Andreolli and inaugurated in 2002; the Casa d'Arte Futurista Depero , also in Rovereto; and the Galleria Civica  in Trento, which became part of the Mart in October 2013.
Born with a vocation as a contemporary agora, the Mart is a special museum in an exceptional context. Conceived more as a cultural hub than a traditional museum, its public spaces provide a forum for dialogue with the Civic Library, the Melotti Auditorium, the Zandonai Theatre, and the Rovereto campus of the University of Trento.
The Mart is a contemporary landmark set in the broader cultural landscape of Trentino. The absence of metropolitan development in the local area translates into high quality cultural and touristic attractions for all those who love nature, the outdoors, fitness and wellbeing, and who value uniqueness.
The Mart is keeper of an inestimable legacy that includes the greatest masterpieces of 20th-century Italian art. It features these and other notable works in dozens of exhibitions  and projects every year made possible thanks to a full staff of curators, conservators, researchers, archivists, training professionals, science educators, and public relations specialists.
From its foundation until December 2011, the Mart was under the directorship of Gabriella Belli, who was succeeded in February 2012 by Cristiana Collu. In June 2015 the Board of Directors appointed Gianfranco Maraniello to the top spot with a five-year mandate.

Free admission for visitors with disabilities and their companions (a certificate of invalidity is required, particularly in case of sensory or cognitive disabilities). Wheelchairs are available upon request.

The indicated parking space is located in Corso Bettini. Other reserved spots are available im the underground parking garage, which is fitted with a lift (door width: 90 cm; int. 210x110) and a 650 cm long ramp (slope: 12%). The indicated entrance door is revolving. The access to Matroneo route is via regular steps (depth: 218 cm depth height: 12,5 cm). The mezzarine floor can be reached only through a set of stairs. The conference room has a tiered seating layout (15,5 cm high, 92 cm deep and 195 cm wide steps), but the higher part of the stalls is wheelchair accessible. Five steps (riser: 16 cm) lead up to the stage. Another lift (int. 140x150 cm) offers access to the workshops - and lecture halls. Cafeteria and restaurant are easily accessibile on the ground floor. The indicated wheelchair accessible toilets are fitted with a grab bar installed on the side of the wc opposite  to the one approached (wc with hand shower). Further dedicated toilets can be found on the other floors.