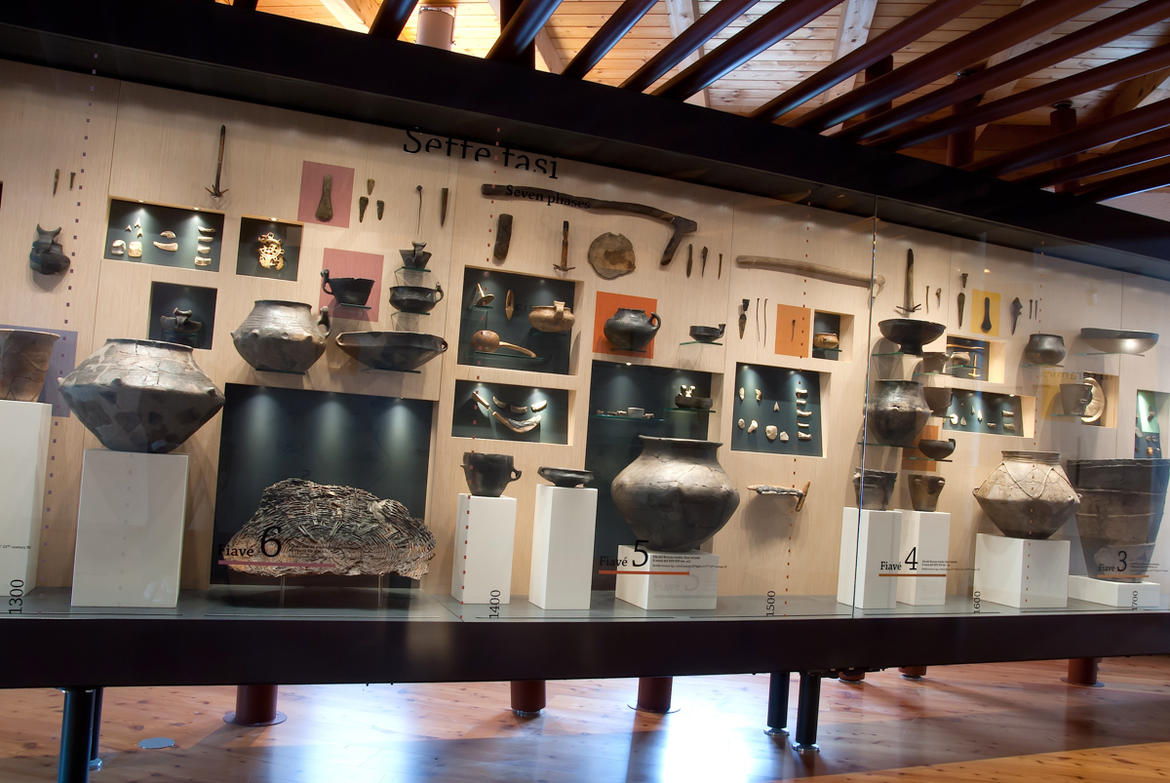 With its pile dwelling museum and internationally renowned archaeological area, included within the UNESCO world heritage site described as “Prehistoric Pile dwellings around the Alps”, Fiavé represents an exceptionally important point of reference for the history of the most ancient European farming communities.

The museum explores the history of the different pile dwelling settlements following one another along the banks of Lake Carera, a lake of glacial origin, between the Late Neolithic era and the Bronze Age.

Excavations have brought to light the remains of huts constructed on the banks of the lake (3800-3600 B.C.), but also  the classic model of pile dwelling erected over the water (1800-1500 B.C.). An evolution of this type of construction is represented by huts on piles anchored to a complex grid structure resting along the banks and on the bed of the lake (1500 - 1300 B.C.). In the last centuries of the 2nd millennium B.C. the settlement moved to the nearby Dos Gustinaci, where houses with stone foundations have been found.

The exceptional state of conservation not only of the piles, but also of many organic materials, makes these pile dwellings particularly fascinating, allowing an insight into aspects in the life of prehistoric communities which are generally unknown.

The museum displays a selection of extraordinary objects many of which are astoundingly modern. Thousands of objects fell into the water, either accidentally or thrown there in the pile dwelling time, providing precious evidence of considerable technical and construction expertise and artisan skills. They include ceramic pottery, but also bronze jewellery and Baltic amber and gold – extremely rare in this era. The 300 or so wooden objects on display represent a unique collection in Europe; there are dishes and cooking utensils, such as cups, ladles and trays, working tools such as buckets, clubs, sickles and axe handles, in addition to a bow and some arrows. The particular environmental conditions of the lake deposits have even led to the recovery of foodstuffs such as ears of wheat, cornelian cherries, nuts, apples and pears.

A whole floor of the museum is dedicated to reconstruction of daily life in the pile dwelling time, offering a unique opportunity to immerse oneself in the atmosphere of a pile dwelling village 3500 years ago!

In addition to the large scale model reproducing the “Fiavé 6” village, various rooms illustrate in turn the life and work of farmers and shepherds, life around the domestic hearth, cooking, clothing and the secrets of metal-workers and hunters. The scenographic elements recalling the poles supporting the pile dwellings, replica models and video footage are also particularly evocative.

One section of the museum is dedicated to the unique Fiavé-Carera biotope, a provincial nature reserve and site of European Community interest. This protected area is indeed one of the largest peat-bogs in Trentino and has a wealth of vegetation, being used for reproduction by many species of reptiles and amphibians and as a stopping off point for migrating birds.

Soprintendenza per i beni culturali